Another day when two new signings were revealed, as both Lee Fowler and goalkeeper Cameron Belford agreed one-year deals at the Racecourse.

Lee will need no introduction to Wrexham fans from his 11 month spell with us in 2011, signing in the February and leaving the following January to joined Fleetwood Town.

Capped numerous times at U21 level by Wales, he has been with a whole host of clubs, but since departing us has seen service with Fleetwood, Doncaster Rovers, TNS, Nuneaton Town and most recently Crawley Town.

"I've had a good conversation with Gary Mills and it has come at just the right time for me to come back. Hopefully I can repay the faith that has been shown in me," said Lee.

"Everything made sense, so I've crossed the T's and dotted the I's this afternoon and signed on."

Joining Lee will be Cameron Belford, who finished last season with Swindon Town and a trip to Wembley last weekend.

"I'm delighted to be here," said the stopper. "I got the call early on from the gaffer, but with the play-offs at Swindon I couldn't make a decision, especially as they want me to stay there.

"We've agreed here and now I'm happy to be looking forward to the beginning of the season. 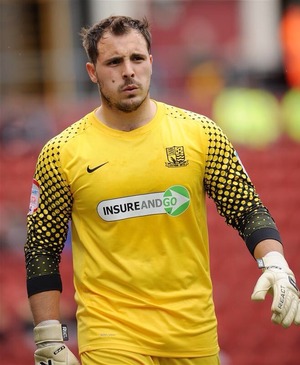 "I was with the gaffer at Coventry, when I was young player and he was the first team coach, so I knew him from there.

"I know Andy Bishop very well from our time together at Bury and he was telling me how great this club is. Obviously I've also seen the success you had at Wembley in the Trophy the first time round and the success under Andy Morrell, who I knew from Coventry and Bury.

"You have to move on and there is a season ahead. There has been a big turnaround in players, the gaffer is bringing in new ones and I'm looking forward to a successful time."

Manager Gary Mills was equally happy to add another two names to his expanding squad for the new season.

"People will know I was interested in Lee Fowler and he has just passed his medical with flying colours.

"I'm delighted, as I think he will be a big player for us this season."

"Cameron Belford is a keeper who I have tried to sign several times before. He was offered a new contract by Swindon Town, but I've sat down with him and he's delighted to be with us.

For me he's top keeper, he's lively and someone who organises his back four. A good talker and someone I feel you need in in this league."

The boss is not done though and there will be a few more new faces in the weeks to come.